It’s El Salvador!! I haven’t had proper internet for the last couple of days, and I couldn’t get any photos to load onto the blog, so anyone one from home that has been waiting for word about your family, please know we are all safe and sound and as soon as I figure out the best way to get things to load, I will send you a whole bunch of photos. Right now, here is the tail end of week one that I finally got to load, week two will begin soon:

What a great way to finish off week one. We took a trip to the orphanage to take the annual photos of the children. 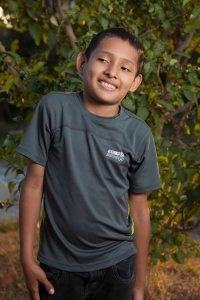 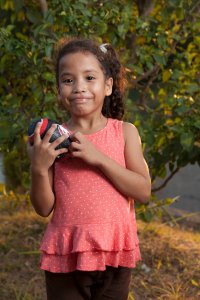 We have a big surprise for them next week when team two visits. We have printed photo books for them, Thanks Printing Place for a great job on the books!

Trevor is getting all set up on his fancy make-shift tripod for the group shot, his real one was buried in the mountain of luggage on the bus.

Trevor has a better one we are going to print for the kids, this was just a test shot I took with my camera to see if the fancy try-pod I set up for him would work.

Unfortunately we were more than two hours late for our visit because our bus had a flat tire on the way. The driver limped the bus down the road to the local tire shop…..nice eh? 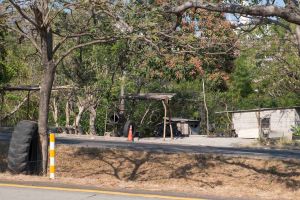 We all had to pile out of the bus while the driver tried to fix it. I felt a bit like we were sitting ducks along the highway.

It was the main highway, so I was hoping no one would come and mess with us. After sitting there on the side of the road for quite awhile some army guys drove by and looped around and came walking up to us with their M16’s, when they first walked up I was sure hoping they were the good guys, but they were and they created a perimeter and stood guard around us. 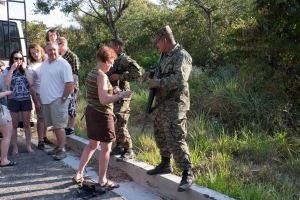 It was a bit unnerving to think we needed the national guard there to protect us, but we were pretty happy they were there.

After some major struggles with the tire and some help from a couple of strong Canadiens they got the tire changed and away we went, not worse for wear!

Just another day in El Salvador! A couple hours late, but we were back on the road all safe and sound!

When we arrived at the orphanage the kids were so excited to see us again, they had so many hugs and smiles to hand out! 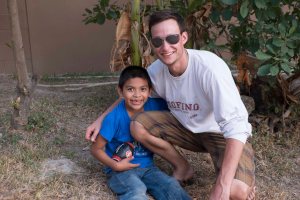 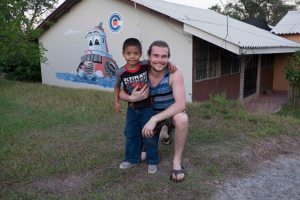 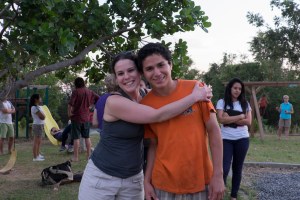 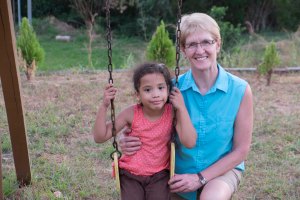 We brought along a whole bunch of footballs that the Calgary Stampeders donated to us and everybody had a great time playing catch. Those kids had a wicked throw! 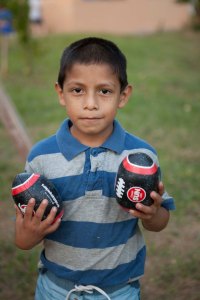 Even the little ones could throw as far as the adults. They had the guys in a real sweat! 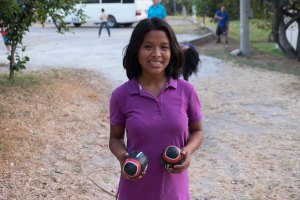 Thanks Jodie and the Stampeders for all the little footballs, 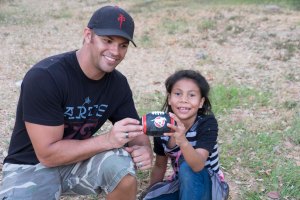 more hours have been spent playing with the balls than any other toys we brought down here!